Menu
Log in
Register
Install the app
You are using an out of date browser. It may not display this or other websites correctly.
You should upgrade or use an alternative browser.

The Textile Bowl and continued control of ACC Atlantic Division destiny will be at stake in front of the eyes of the nation on Saturday, Oct. 1 when the No. 5 Clemson Tigers host the No. 10 NC State Wolfpack on ABC's Saturday Night Football. Kickoff at Memorial Stadium is set for 7:30 p.m. ET. 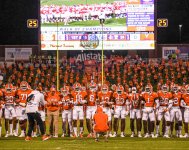 Saturday's game will be the first in the series to feature both teams in the AP Top 10. The Tigers and Wolfpack have previously met five times with both teams ranked in the AP Top 25, including Clemson wins in 1991, 2017 and 2018 and NC State victories in 1986 and 1992. The lower-ranked team took each of the first three meetings until higher-ranked Clemson squads earned wins in 2017 and 2018.

With Clemson at No. 5 in the AP Poll and NC State at No. 10, the game will feature the highest combined ranking between the two teams in series history, surpassing the 2018 matchup when No. 3 Clemson trounced No. 16 NC State, 41-7. Ranked Clemson teams are 20-7 all-time against NC State, and Clemson is 7-5 all-time against ranked NC State teams.

Staff member
According to the scoreboard, we are still 42 min from kickoff

Staff member
Mukuba getting the start at CB over Fred Davis

Staff member
Tigers settle for 3... as they made that first drive look too easy...but could not cash in the TD

Staff member
great play call on the last play...had Collins, Williams and Randall clear out the MOF for Briningstool